The CFB provides training, resources, and direct assistance from your Candidate Services liaison to help campaigns navigate the audit process. 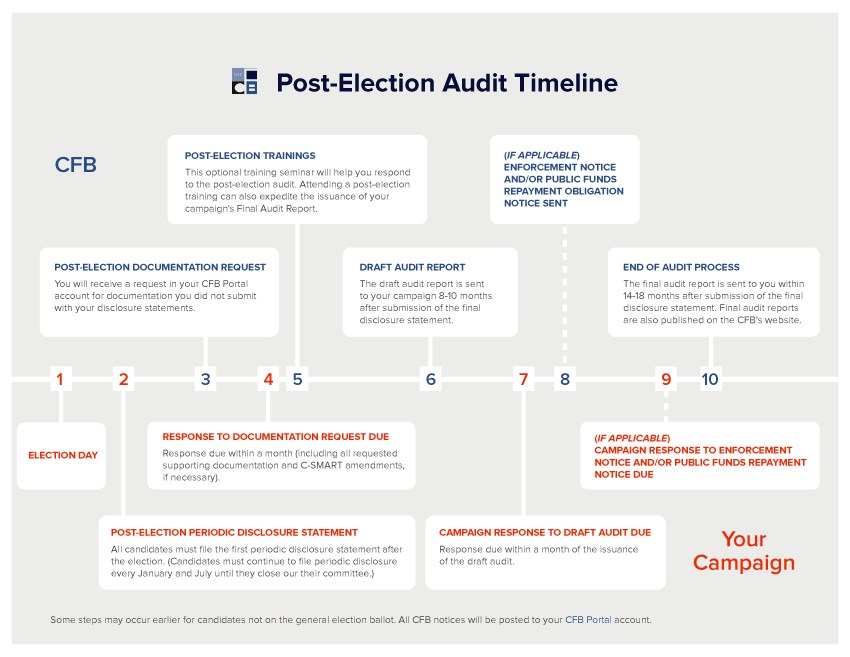 The draft audit report is based on CFB staff’s review of documents submitted by your campaign throughout the election cycle and in response to the post-election documentation request. The CFB will cite any preliminary findings of non-compliance with the Campaign Finance Act and CFB Rules. The report may also contain potential public funds repayment obligations.

Note: the draft audit report is not a public document and does not represent any final determinations by the Board.

Your campaign’s response to the post-election documentation request and draft audit report is a critical opportunity to address issues that may lead to penalties or repayment of public funds if left unresolved. Each finding should be fully addressed in the same order it was presented by providing additional information, explanation, or documentation of your campaign’s financial activity (even if the documentation was submitted previously). Each piece of documentation should be labeled with the corresponding finding number and applicable C-SMART transaction ID.

Most findings may require you to file amendments to your disclosure statements using C-SMART. After data entry is complete, you should submit amendments to all previously filed disclosure statements. Additionally, run the last statement of the election cycle you have submitted so Final Audit Report, because newly entered transactions will only appear in that statement. Remember, entering or modifying a transaction in C-SMART does not update the information on file with the CFB. You must file the amendments in order for the data to sync.

If your campaign does not respond to the draft audit report within 30 days after it is sent, you will be assessed a substantial financial penalty (see Campaign Finance Act §3-711(2)(b)). In addition, unanswered findings will be referred to the CFB Legal Unit for assessment of separate penalties. If your campaign needs more time, you must request for an extension at least 48 hours prior to the deadline in writing to AuditMail@nyccfb.info. Be sure to include the candidate’s name, election cycle, and the additional amount of time you need to respond. Extensions are never guaranteed. A response to your request with a potential new deadline will be posted to your CFB Portal account.

You may receive an Enforcement Notice and/or a Notice of Public Funds Repayment Obligation after responding to the draft audit report. These notices include findings that remain unaddressed or for which you provided an insufficient response.

For further assistance with the post-election audit process, be sure to attend a Post-Election training and contact your Candidate Services Liaison.

The final audit report is sent 14-18 months after submission of the final disclosure statement. It will be posted to your CFB Portal account and published on the CFB's website. It will detail any findings, violations, and penalties determined by the Board. It will also detail any public funds repayments owed to the Public Fund. If a post-election public funds payment is due to the campaign, it will be issued with the final audit.

The Campaign Finance Act sets the following deadlines for the CFB to complete a campaign’s draft audit report and final audit report. The deadline is calculated from submission of the final disclosure statement.

* The audit process is completed when the CFB issues your FAR or when the CFB notifies your campaign of potential penalties and/or public funds repayment obligations. Per Admin. Code §3-710(1)(b) and Board Rule 10-02, the issuance of your campaign’s final audit report may be expedited by two months if the candidate, treasurer or campaign manager completes the CFB’s Post-Election training.

These DAR and FAR completion deadlines do not apply if your audit raises issues of serious violations. These include potential campaign-related fraud, other potential criminal activity, activity that may result in a breach of certification, or potential significant violations of the spending limit.

Additionally, deadlines will be extended (in the Campaign Finance Act, this is called “tolling”) if your campaign: