By the People: The New York City Campaign Finance Program in the 2013 Elections

Candidates for City office in last year’s elections overwhelmingly funded their campaigns with small contributions from City residents according to a comprehensive report released today by the New York City Campaign Finance Board (CFB). The report, “By the People: The New York City Campaign Finance Program in the 2013 Elections,” also includes the Board’s recommendations for legislative actions to strengthen and improve the administration of the Program. (Download the report).

The report shows how New York City’s landmark small-dollar public matching funds program helps candidates rely on New York City residents to fund their campaigns. Small-dollar contributors live in every neighborhood throughout the city, and the matching funds that amplify their impact allowed candidates to fund their campaigns without relying on large, potentially corrupting contributions from institutional supporters and special interests. 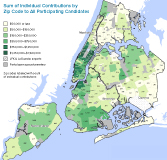 For this report, the CFB worked with the Center for Urban Research at the CUNY Graduate Center to prepare maps showing contribution patterns within New York City.

The partnership resulted in maps appearing in the printed report and interactive maps that allow the viewer to explore where in the city candidates for different offices raised contributions.

The appendices contain reports and disclosure data used in the post-election report and in the maps.

Candidate participation in the Program has remained extremely high, indicating most candidates feel that matching funds provide an effective way to fund their campaign.

Outside spending played a large role, but several participating candidates won elections despite being opposed by significant independent expenditures. The matching funds helped ensure that voters, not money, decided last year’s elections. The CFB’s disclosure rules provided New York City voters with detailed information about outside spenders and their activities.

By the People: The New York City Campaign Finance Program in the 2013 Elections