Statistics and interactive maps tracking turnout and registration in 2019 elections, and a major study analyzing participation in NYC communities over a decade. 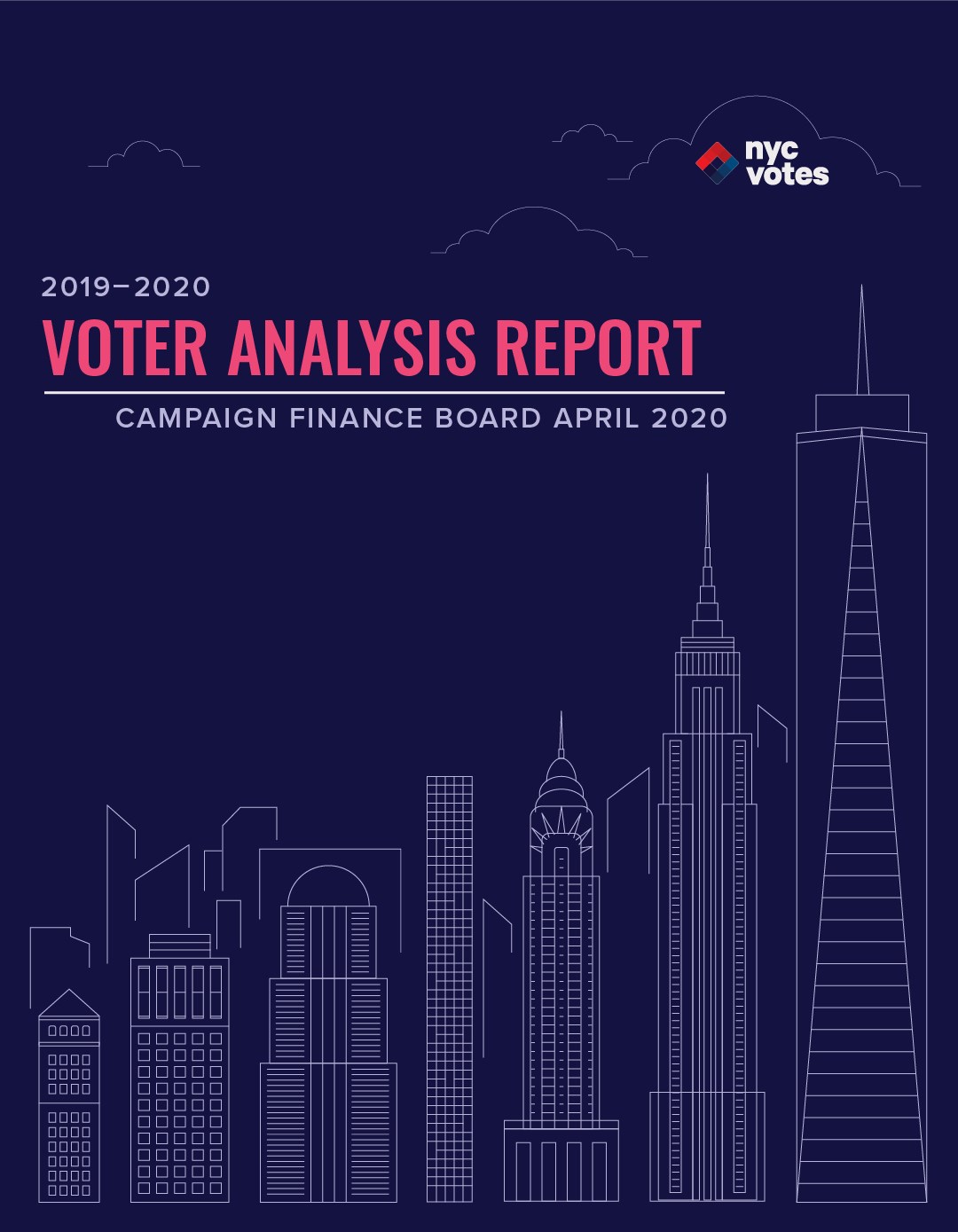 The Voter Analysis Report for 2019-2020 (released April 30, 2020) includes new research on voter participation in the decade from 2008 to 2018; original analysis on voting in 2019 elections; and recommendations for legislative and policy changes to expand access to voting in NYC. The tabs on this page include an executive summary, interactive maps, and updates, providing additional context for the full PDF report. 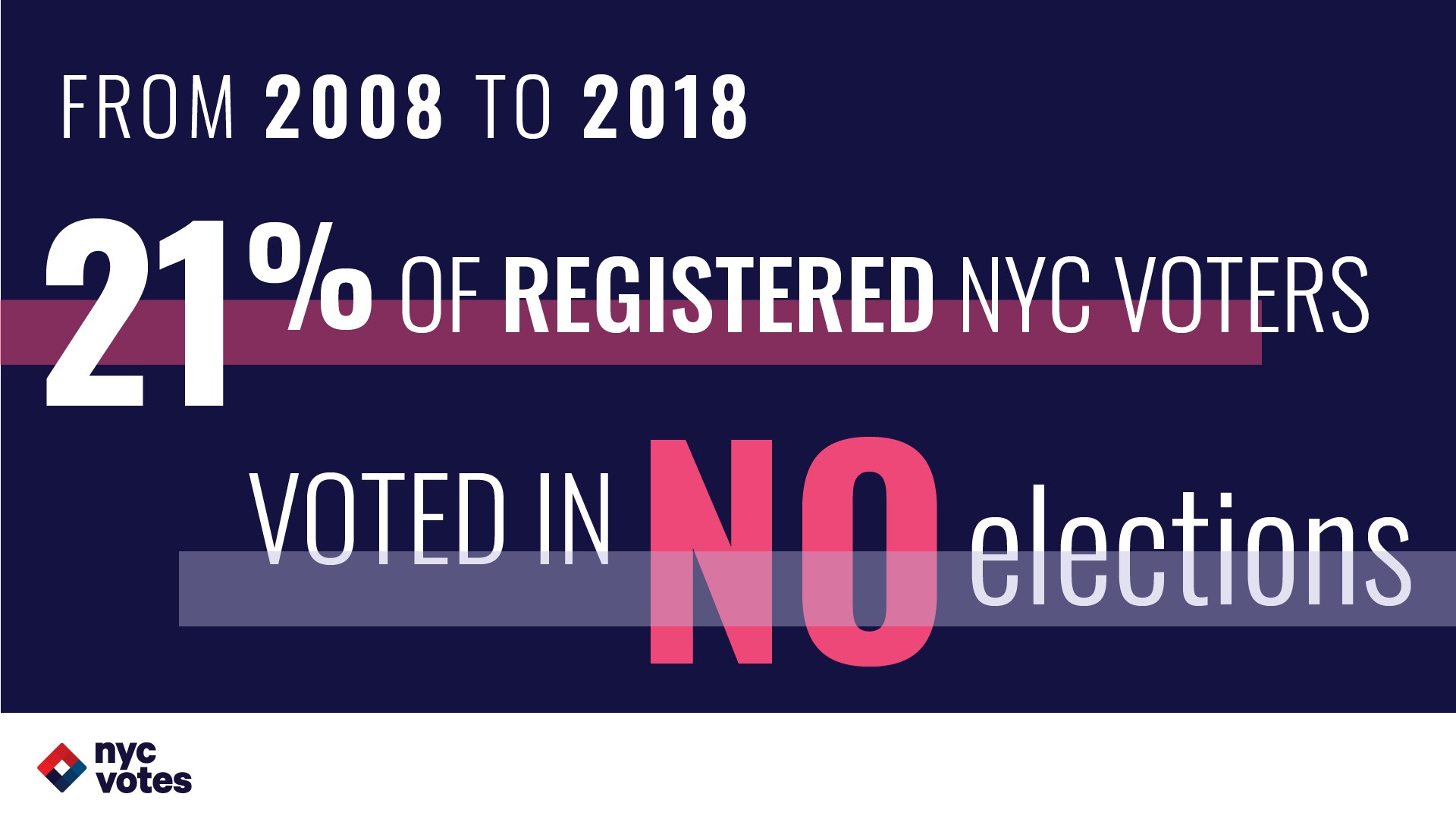 We then averaged these individual scores to come up with a weighted mean participation score for all of New York City (28.4) as well as scores by borough (see below). Interactive maps showing averaged participation scores in census tracts and community districts are available in the tab on this page, titled “Participation Research.” 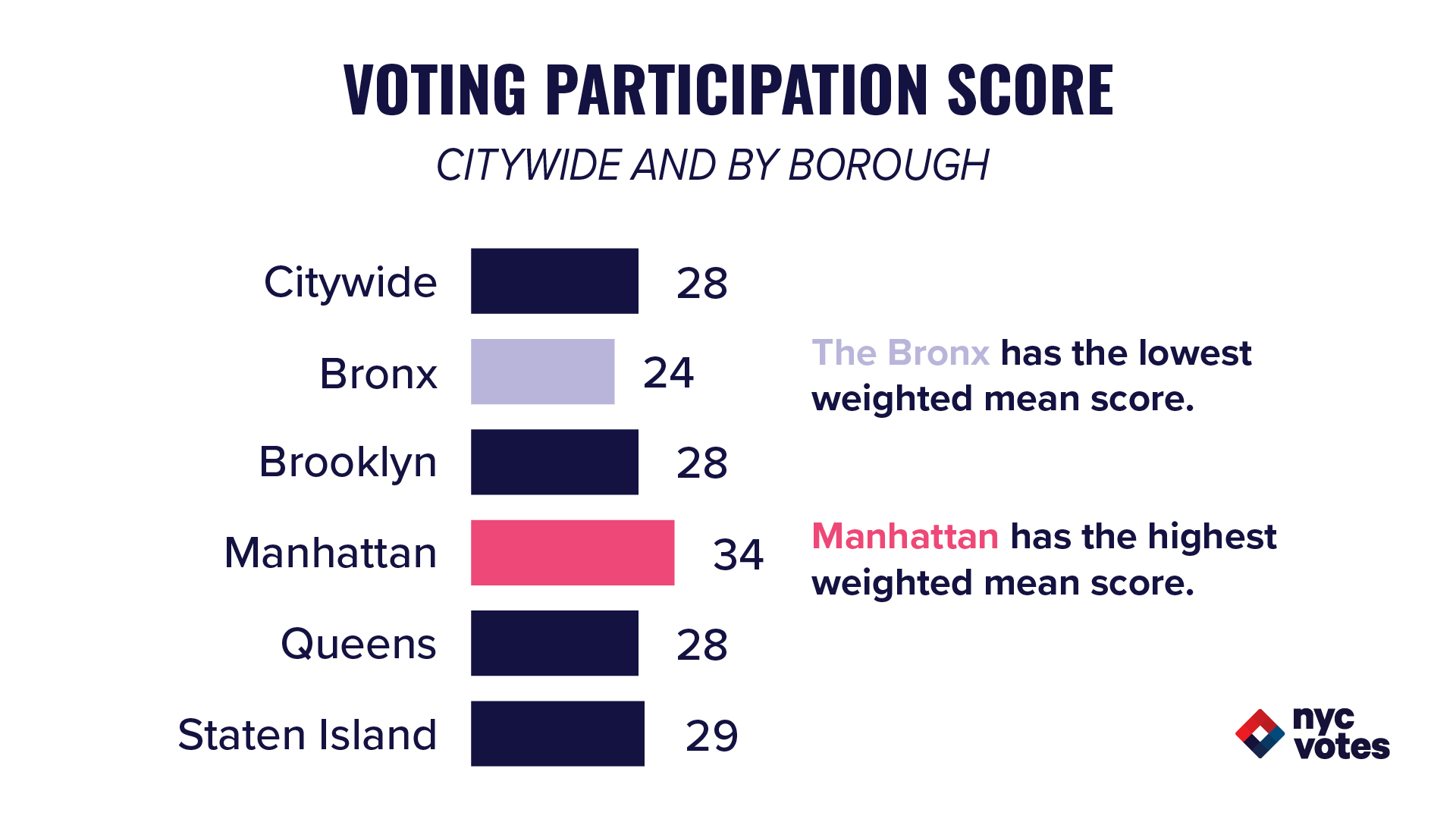 Lastly, we ran a linear regression with variables taken from the Census Bureau’s American Community Survey in order to test if certain demographic characteristics and socioeconomic factors impact the voting behavior of New Yorkers. Our top findings are:

Overview and Analysis of the 2019 Election
The 2019 election year was much quieter than the previous three election years in terms of voter turnout and top-of-the-ticket races, but for the first time, New Yorkers were able to vote early in the general election. New York City voters also voted on five ballot questions to change the City Charter and had the first ever citywide special election for Public Advocate. 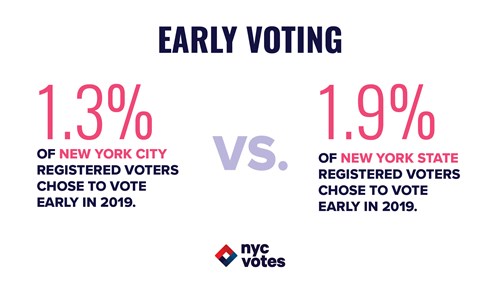 In the 2019 general election, overall voter turnout increased compared to the last judicial election year in 2015, continuing the national trend of higher voter turnout since 2016. However, only 17.2 percent of registered voters turned out to vote.

Interactive maps showing voter turnout and registration rates are available in the tab on this page, titled “2019 Elections.”

Policy & Legislative Recommendations
While much has been accomplished through legislative means in the past year, the report makes several recommendations to improve access to voter registration and voting for New Yorkers:

Even though the questions appeared on the second page of the general election ballot, there was surprisingly little drop-off between total ballots cast and votes cast on each ballot question[1].  Votes cast for Ballot Proposal 1 were 13.0 percent less than total votes cast, with drop-off growing progressively between the first and last questions; 16.9 percent fewer votes were cast for Ballot Proposal 5 than the total number of votes[2]. Below is a link to maps displaying each ballot questions drop-off from total ballots cast by Assembly District.

[2] Roll-off, or residual votes, are calculated as the difference between total ballots cast and votes cast for each ballot question.

The dataset used to create these participation scores is posted on the NYC Open Data Portal. 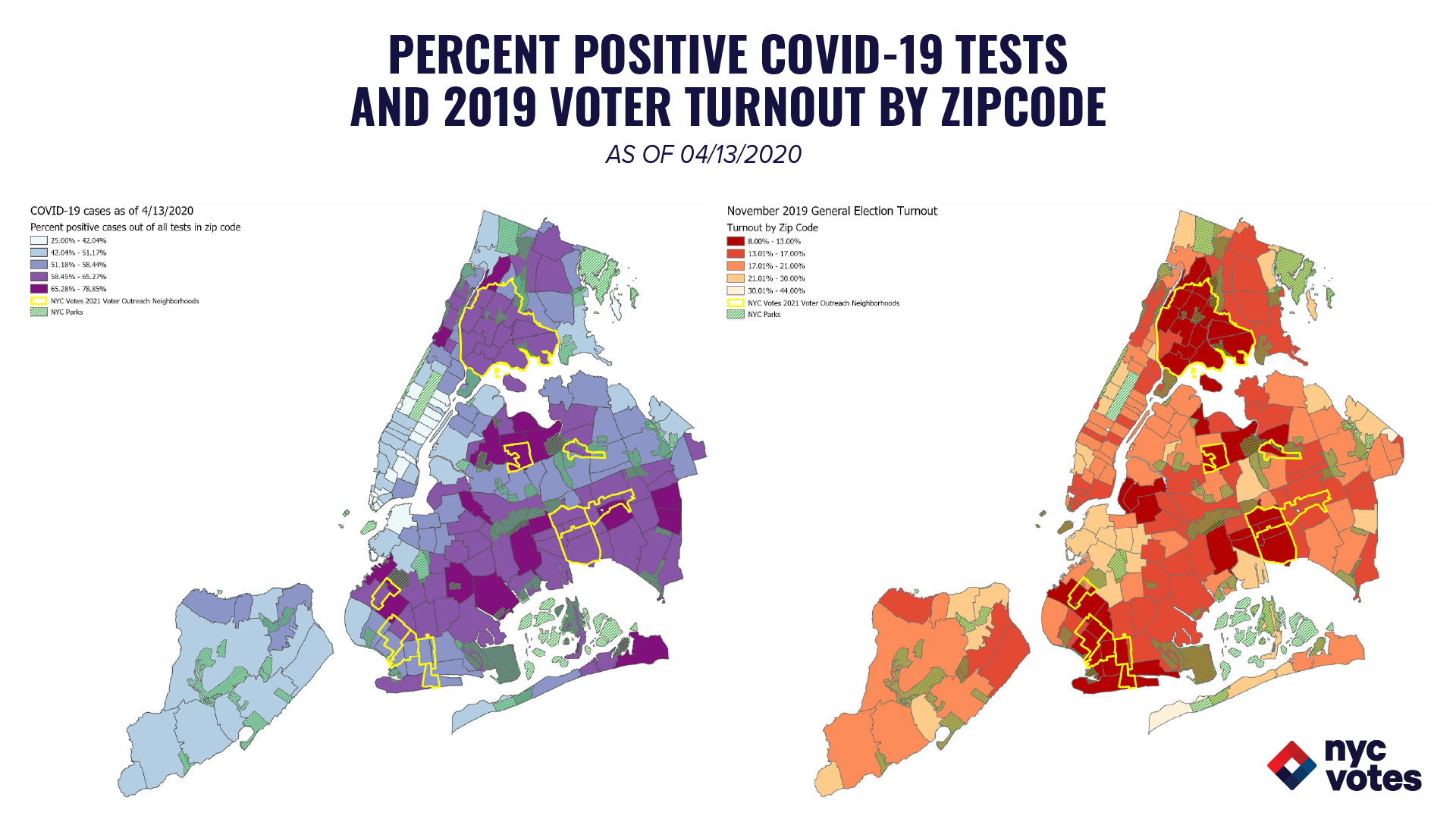 As this report was completed in March 2020, the city’s democratic systems and processes -- along with practically every aspect of daily life in New York City -- were disrupted by the massive effort to slow the spread of a novel coronavirus, COVID-19. Our analyses have indicated that the same neighborhoods that have historically seen lower turnout in elections, are also amongst those hit hardest by the pandemic, raising significant concerns about the impact on important upcoming elections.

The challenges of in-person voting during a pandemic are clear and significant. Elections traditionally provide a time for citizens to gather together in large numbers to engage in the practice of democracy. But restrictions on public gatherings recommended by public health authorities in response to the spread of COVID-19 cast regular poll site operations in a new light.

In jurisdictions around the country, many voters wait packed together in long lines to make their voices heard. Institutions that regularly serve as poll sites may be justifiably concerned about allowing potential carriers to pass through their doors--especially senior centers or schools. While early voting opportunities can provide space for voters who seek them out to follow physical distancing guidelines, they offer no such protection to the dedicated poll workers who interact with each voter requesting a ballot.

In response, many election experts and advocates have advocated for prompt and widespread adoption of vote-by-mail.

Washington State, for instance, mails ballots to every registered voter 18 days before each election. Voters can mail their ballots back or return them to designated ballot drop boxes by the end of Election Day. Four other states--Colorado, Hawaii, Oregon, and Utah--conduct all-mail elections.

In New York State, mail-in or absentee voting is available only to voters who can attest to a specific reason they will be unable to appear at the polls, either for absence or illness. While Gov. Cuomo’s order expanded the meaning of “temporary illness” to cover those seeking to stem the spread of COVID-19, its effects are temporary. As issued, it applies only to elections through June 23. By whatever means are available, expanded access to vote-by-mail should be offered to New Yorkers on a permanent basis.[1]

What we’ve learned in this moment is that universally-accessible vote-by-mail is not merely a turnout-boosting convenience. It can provide necessary resilience for our democratic system when the logistics of in-person balloting become impossible or impractical to maintain. It is one of a series of critical measures that should be available to administrators to ensure the continuity of our elections. New York should act promptly and decisively to implement it here.

The COVID-19 response effort is also shifting the way that organizers and campaigners approach the work of engaging voters. Traditional methods of registering voters will need to be rethought and campaign plans will need to be redesigned to adapt to the reality of an election year conducted during a pandemic. At minimum, a response that preserves New Yorkers’ access to elections through crises will require New York to finally end its reliance on a paper-based voter registration system that depends heavily on face-to-face interaction to bring new voters into the democratic process.

Times of crisis can force hard choices upon us; they demand we articulate our values and protect the things we value most. Elections are essential, particularly and especially in these difficult moments. In just the last twenty years, New Yorkers have come together to vote in the wake of a terrorist attack and in the aftermath of a destructive storm. Each instance demonstrates anew that our election laws and systems badly need flexibility to ensure elections can adapt effectively to public challenges like this one.

Democracy will persist—if we choose it.

Read the full letter, including a summary of the electoral changes in response to COVID-19 in New York and throughout the country, by downloading the PDF report. The latest updates are available on our website, at www.nyccfb.info/coronavirus.

[1] The New York State Constitution requires voters to attest to a reason they cannot appear at the polls in order to apply for an absentee ballot. In January 2019, the Legislature passed legislation to amend the Constitution to allow no-excuse absentee voting in New York State. Such legislation must be passed a second time in a subsequent consecutive session of the Legislature, and then put before voters in a statewide referendum before it can be enacted.