We are a generation of lines
We would stand on line for hours for $900 sneakers
That would go out of style in three weeks
We would stand on line for a new phone
That does the same thing our current one does
But you see I think our lines are getting all crossed and confused y’all
We are sending the, the
Wr…wrong
Messa…Messages
Our country is wailing out to us, to stand on the right line to make things better
We are one of the richest countries in the world
But we got people starving on our own blocks
Art programs in city schools being yanked out by the easel
Violence is STILL on the rise all throughout our country
There aren’t enough cops where they need to be
“Chi-town”; Chicago is now known as “Chi-raq”
More young men hit ground cold there than anywhere

Right now us young people chilling
This voting thing doesn’t mean much to us
We don’t think that our vote counts
But that’s what they want us to think
DId you know that a certain presidential candidate wants to get rid of our financial aide?
And you’re over there
Standing on line for those brand new Jordan’s
When Michael ain’t going to pay your tuition!
Our generations vote is stronger than any others to change our future and our now
If you do not vote, you do not have the right to complain
You can smell Election Day in the air
I know which line I’m going to be standing on,
Do You? 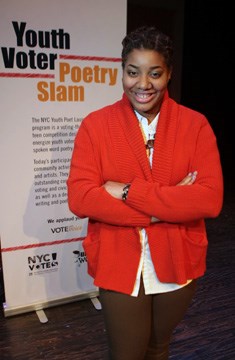 Ashley August is a 19 year old Brooklyn native and is currently a sophomore at Mercy College. A young ‘tour de force’ August is a writer, actress, singer, and performer. She began her poetic journey in the summer of 2009 at Urban Word NYC where she quickly established herself as a rising star: becoming a Youth Leadership Board member and participating in several highly acclaimed competitions including the 2010 Urban Word Slam Finals, the 2011 Knicks Poetry Slam. In 2012, August landed a spot on the Urban Word Youth Slam team.

August has been a strong advocate of many causes, and continues to volunteer for several worthy organizations including the Brooklyn Special Olympics, and the NYC Kidney Walk. Currently, August is writing and working on her one woman performance entitled “Sea”, and collaborating with her Hip Hop Soul Project, “Aztec Gold”. Emerging out of the youth poetry scene, August is motivated to speak truth to power and push the boundaries of spoken word. August has carved her voice out of the experiences of herself and her family, embodying the perserverance, charisma, and strength needed to rise against all odds.