Maybe we’re waiting for something ridiculous to happen,
Like Miley Cyrus becoming the first female president
Like racism being diagnosed as a mental illness
Like police sirens becoming our new national anthem

This is a call to action
To rally
To revolution

And I know it’s hard
Living in a society where we attend more funerals than birthday parties
And I know you think you’re just another flame in an uncontainable inferno,
And what does a flame know about voting anyway
What’s a vote to a burning democracy?
And I think I just saw the rapture coming
And I know you think Obama be just another God that has forsaken us,
Just know that calling any man a God is the true Armageddon
Just know that your refusal to vote is the true Armageddon

So vote because when Armageddon does happen, it will look nothing like this 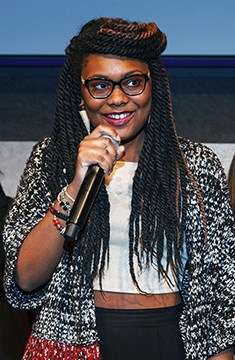 Born and raised in the Bronx, Crystal Valentine, age 20, has been writing poetry since she was in the fourth grade. She is currently enrolled at NYU, studying creative writing and adolescent mental health studies. She is a member of the 2014 Urban Word slam team, a returning member of the NYU poetry slam team, as well as NYU’s current Grand Slam Champ.

She has performed at renowned locations such as the Lincoln Center, New Amsterdam Theatre, the Apollo Theater, and the Nuyorican’s Poet’s Café. She has hosted several open mic nights around New York City and has taught poetry workshops for youths. Even more so than in her own poetic talent, Crystal believes in poetry’s ability to instill change in those who embrace it.