How It Sounded to Squish a Cockroach

It was as if splintering a shard
of wood with a bag of blood
in its body, the dark beast,
dissolving in the palm of my hand
against the ceramic basin
of my bathroom just as I pressed
into its abdomen, potentially executing
its children that would, in fact, foster
colonies in the sink were it not
for this simple act of carnage.
If my hand, in that moment,
was not God, explain its ease
in deciding the creature’s fate,
beneath the palm, becoming alike
to spilled oil, slick & staining,
its wings unfolding below the skin,
black smeared upon black.
This, an erosion of deadly colors
much like a portrait
of a citizen, so hidden behind
its own blood that it becomes less
than a citizen but more like a roach
squished on the side of a sink
without a voice or rhetoric, unable
to vote against the things that which kills it.
And isn’t that the most common and tragic story
of any creature’s inability to speak
the same language of its conqueror,
but we still say; Please, do not make me the body
that only the outraged will remember.
My fellow countrymen, I suggest we vote
to make the slaughtering of roaches
illegal, because don’t most of us
know how it feels to be beneath the palm;
pressed and oppressed? 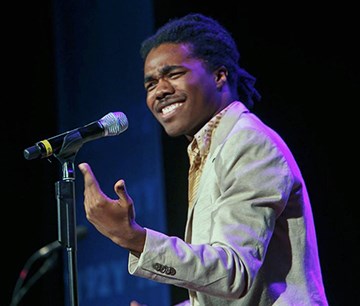 19-year-old Nkosi Nkululeko is a Callaloo Fellow and The Watering Hole Fellow. He has received nominations for the American Voices Award, Independent Best American Poetry and The Pushcart Prize. Nkosi was a member of the 2014 Urban Word NYC Slam Team and the 2015 Urbana-NYC Slam Team. He has performed his written works in venues such as the Apollo Theater, Nuyorican Poets Café and Harlem Stage. His work is currently published in No Token, Rose Red Review, Hobart and elsewhere. He lives in Harlem, New York, and enjoys listening to jazz.