Getting Out the Youth Vote, Poetically

A new generation of young people are finding their political voices in 2018 as young leaders like Stuyvesant High School junior William Lohier, New York City's Youth Poet Laureate for 2018, have emerged as outspoken advocates on critical issues facing our country. Join Urban Word NYC and NYC Votes in celebrating the next crop of new leaders on the eve of the midterm elections when NYC names its next Youth Poet Laureate. 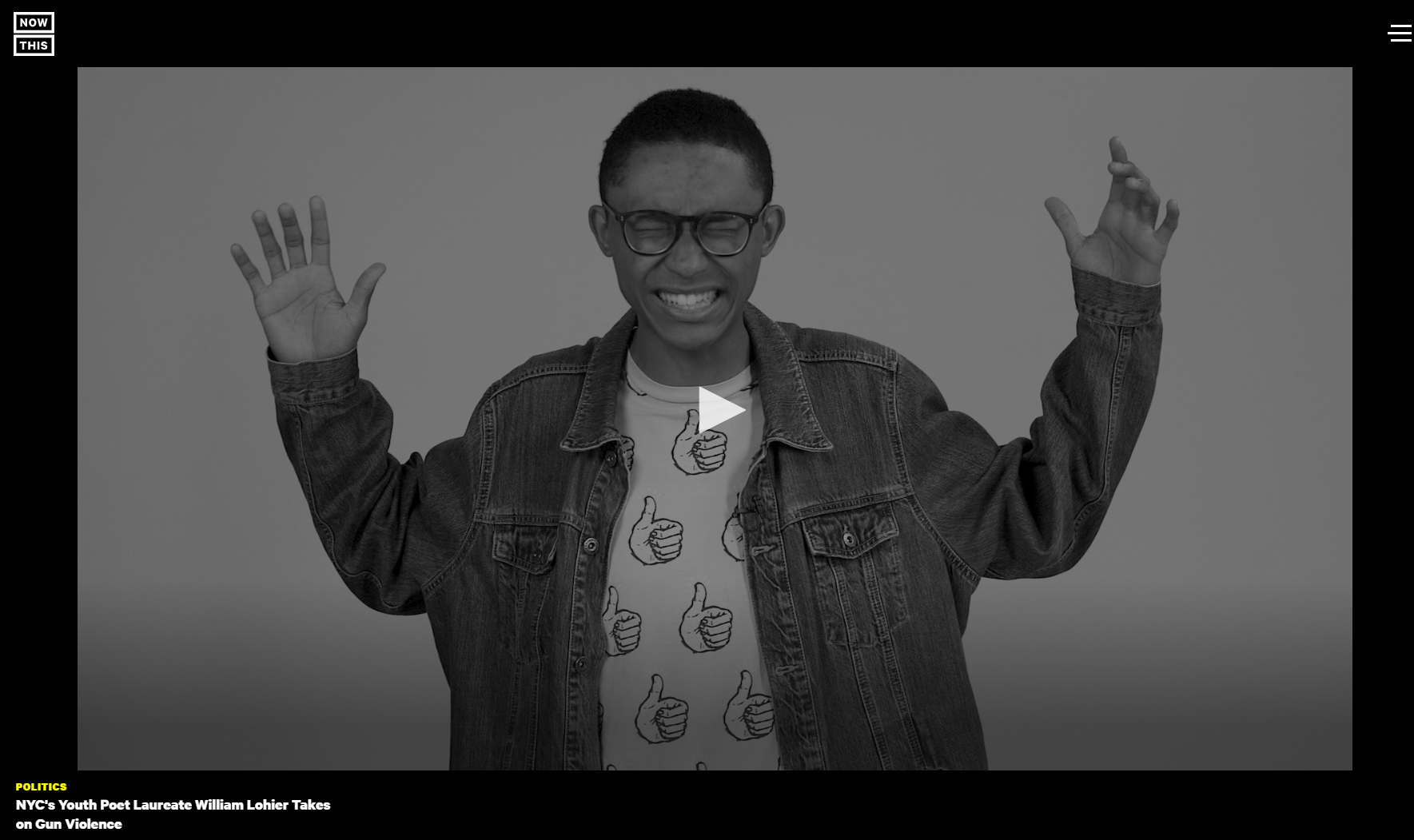 Over a dozen new teenage wordsmiths will perform, while one will be selected to replace Lohier as the NYC Youth Poet Laureate for 2019. Contestants participated in a 3-week workshop at the historic

Federal Hall National Memorial, during which they received feedback on their writing, working together to hone their creative talents and political voices. The workshop was facilitated by NYC Votes and a team of nationally acclaimed artists, actors and musicians in the Urban Word NYC Community.

The training will culminate on the eve of the 2018 elections, Monday, November 5th, at the Intrepid Sea, Air & Space Museum.  Each youth poet will perform a voting-themed poem intended to inspire their peers, and everyone in the audience, to vote in every election. Attendees can expect exciting performances that inspire them to vote on Election Day as the poets showcase their ability to translate complicated issues into clever rhymes.

Hosted by Bronx native and Poet in Residence with Urban Word NYC Roya Marsh, the program begins at 7:00 PM, lasting until 9:00 PM, when Lohier will pass the torch to the newly-crowned NYC YPL for 2019. The YPL receives a book deal to publish their first collection of poetry. NYC Votes works closely with each YPL throughout the year to reach young voters across the five boroughs, promoting civic engagement and voting through spoken-word poetry performances at public events and in the media.

Tickets to the program are available for a limited time through an Eventbrite RSVP page.

Now celebrating its tenth anniversary, the NYC Youth Poet Laureate program was developed through a partnership between NYC Votes, the nonpartisan voter engagement initiative of the NYC Campaign Finance Board, and Urban Word NYC. Corporate partners for this year's program include HBO and Colgate Palmolive Co. The program is designed to identify young writers and leaders committed to creating change through civic engagement and literary excellence. It has since been replicated in 35 cities across the country.

Please contact NYC Votes at press@nyccfb.info with any media inquires for this event. 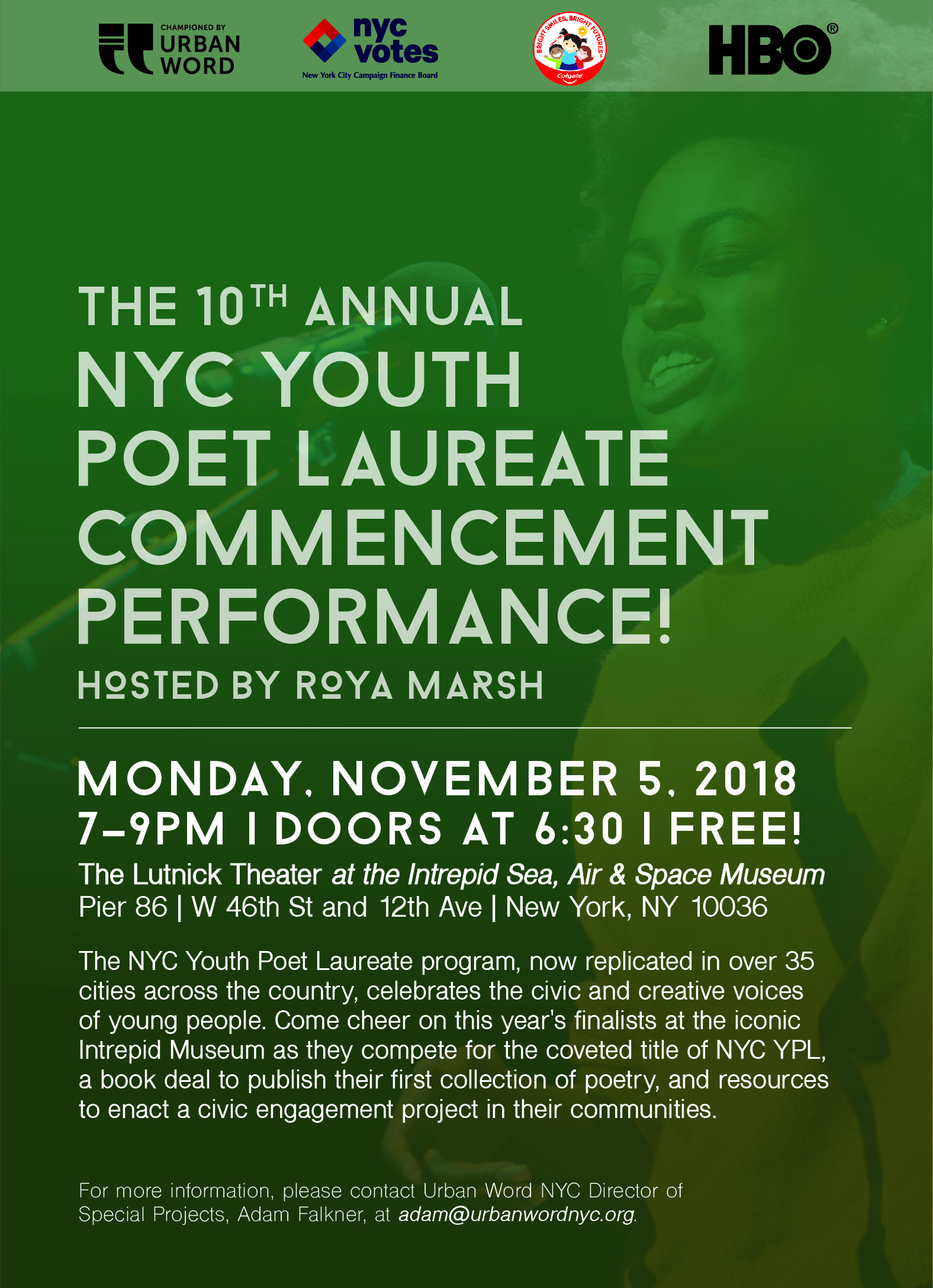 NYC Votes is the nonpartisan voter engagement initiative of the New York City Campaign Finance Board (CFB) and its Voter Assistance Advisory Committee (VAAC). In addition to promoting voter registration, participation, and civic engagement in New York City through its many programs and partnerships, NYC Votes sponsors the city’s official Debate Program and produces the citywide Voter Guide.